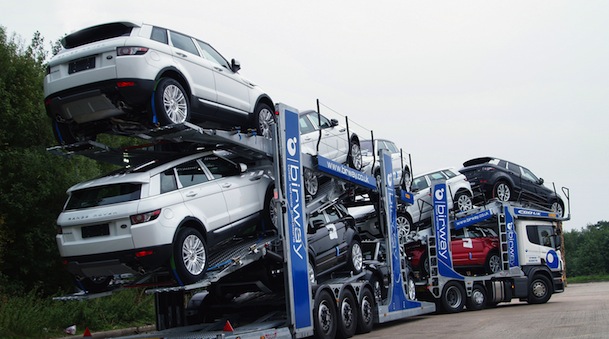 Jaguar Land Rover, the UK’s leading manufacturer of premium luxury vehicles, and a prestigious client of Birway has delivered its strongest ever full year global sales performance thanks to the introduction of a series of multi award winning new vehicles in 2013.

Full year retail sales stood at 425,006, up 19%, with strong growth in all major regions and new records set in 38 markets, including Russia, Brazil, Korea and Canada. Regional performance for the full year was as follows: Asia Pacific and the China region up 30%, North America up 21%, the UK up 14%, Europe up 6%, and other overseas markets up 23%.

Commenting on the company’s sales performance, Dr. Ralf Speth, Jaguar Land Rover CEO said: “2013 has proven to be a very positive year for Jaguar Land Rover thanks to continuing strong demand for vehicles across the range. Our unrelenting focus on design, technology, innovation and quality has seen Jaguar Land Rover reach global consumers in more markets than ever before thanks to its most desirable product line-up, enriched further in 2013 by the Jaguar F-TYPE and all-new Range Rover Sport”.

Jaguar Land Rover‘s enhanced stable of products received 195 awards in 2013. Jaguar received 80 awards with its most decorated model, the F-TYPE earning the World Car Design of the Year, Germany’s most prestigious award, The Golden Steering Wheel award for the Cabriolet & Coupe Category and BBC Topgear magazine Convertible of the year. Notably Jaguar also received coveted recognition from J.D. Power, being named the UK’s number one automotive brand in the Vehicle Ownership Satisfaction Survey (VOSS) and the highest ranking manufacturer among luxury brands in the US J.D. Power Sales Satisfaction Index Study (SSI).

Land Rover’s full range of vehicles received 115 honours in 2013 with Range Rover topping the Land Rover awards table with 55 accolades including, Luxury Car of the Year by What Car? in the UK, Women’s Luxury Car of the Year by the Women’s World Car of the Year jury and Best Luxury SUV from Edmunds.com and Forbes. Range Rover also achieved the Highest APEAL Score of any model in the J.D. Power 2013 APEAL survey – the first time a model outside the large premium car segment has ranked highest among all models in the industry. The Range Rover Sport, launched in 2013 also received a host of awards including, SUV of the Year by Topgear magazine, Guangzhou Daily in China, Bloomberg.com and EVO magazine in the Middle East.