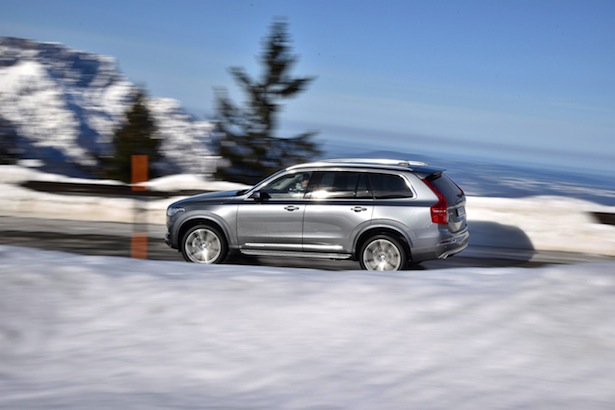 The new Volvo XC90 is picking up awards all over the place. Not surprising. This large 4×4 is a great option in the sector – particularly in seven-seat T6 guise.

The  XC90 is the real deal when it comes to 4x4s. Big and muscular, it has all-wheel drive and a host of features to keep you motoring safely in all terrains.

The XC90 also looks good. I tested the 320 bhp T6 in high Inscription spec which has everything you could want in a car like this.

It has sporty good looks despite its rugged capabilities. This is a car which is the ultimate in practicality, but which still looks smart on the road. In design terms, there’s no doubt that this is a Volvo. Big, sturdy-looking and roomy, it’s all Volvo from front, back and side.

It has chunky bumpers, a high stance, superb traction and a host of electronics to keep you safe (this is a Volvo, after all). But one of the big advantages in this specification is the seven-seat configuration. Unlike some seven-seaters, adults can travel in comfort, while still leaving a respectable load capacity.

I took the XC90 around the country roads, rutted tracks and hilly fields of North Yorkshire, and it didn’t miss a beat. With its chunky tyres and good ground clearance I was impressed how good its capabilities and handling were, although I didn’t give it an extreme off-road workout.

I test drove the 320 horsepower 2.0 litre four cylinder petrol powered version. This is a superb engine, very powerful but with smooth, unfussed power delivery and a good deal of grunt on kickdown. Linked to an effortless eight-speed automatic transmission, driving it is a pleasure, particularly when you need mid range power.

This is a big vehicle, so petrol consumption is not going to be too frugal. Published figures are 36.7 mpg in mixed driving, but to be honest I struggled to get near this, even with a careful right foot. The best I could achieve was around 28 mpg.

Ride is comfortable, with nicely damped suspension. The suspension settings are fairly soft for comfort, but that does mean a bit of body roll on winding roads. The supremely comfortable leather seats keep you well-supported though.

Most functions are controlled from a central nine-inch touch screen which is also home to the standard fit satellite navigation, DAB radio and media functions, Bluetooth phone etc. Heating, stop/start switch-on and other vehicle controls use this facility. It takes a little while to get used to, and care has to be taken not to take your eyes off the road, but it is intuitive and easy to use after a while.

The interior is luxuriously trimmed with leather upholstery and soft trim. The dash is uncluttered and clear. There’s plenty of leg and elbow room inside the cabin, and with the third row of seats stowed the load space is huge. The powered tailgate has hands free operation, which is a useful touch.

The XC90 T6 Inscription comes at £53,745 on the road (the range starts at £45,750). My test car came loaded with extras which put another £14,000 onto the price. These included panoramic powered sunroof, head-up display, adaptive cruise control with distance alert, lane control, blind spot monitor,  park-assist and all round parking cameras, beautiful Luminous Sand metallic paint, heated front seats and washers, electronic air suspension and a premium Bowers and Wilkins sound system. Volvo motoring at this level isn’t cheap, but you get a lot of car for your money.