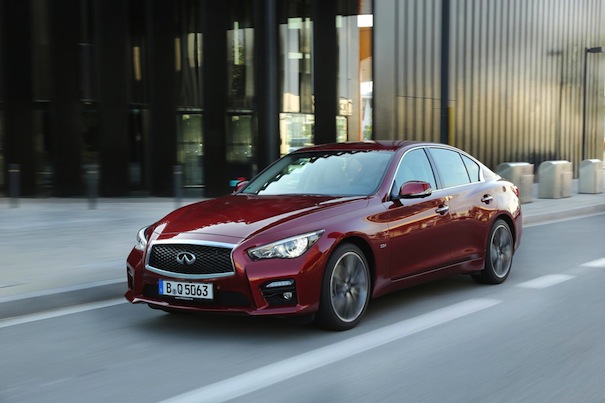 If you’re looking to buy an executive saloon, it’s unlikely that the Infiniti Q50 will be top of your list, writes Ian Strachan.

Which is a shame, because this sleek good looker is a beautiful car which performs faultlessly, is well-specified, good value and very pleasurable to drive. In fact it could be the best car you haven’t heard of.

As Lexus is to Toyota, so Infiniti is to Nissan. Infiniti – a relative newcomer to the UK market, first arriving in 2008 – is Nissan’s luxury brand. It’s probably best known as one of the Red Bull F1 team sponsors, with its logo emblazoned across the front of Sebastian Vettel’s car.

I drove the new Infiniti Q50 Sport which comes with a peppy 2.0 litre petrol engine. I test drove the seven-speed automatic and it’s a very good car indeed. A powerful enough engine, a muscular, rounded appearance, and a high specification mark the Q50 out as a serious contender in the executive sector.

The curvy Infiniti Q50 has beautiful coupe-style sculpted lines with a high waist and large front wings which give it a pleasing side-on appearance, helped by chunky 19 inch triple-spoke alloys.

Inside you get a real feeling of size, cosseted in leather luxury and surrounded by easy-to-reach technology. The interior is roomy and light, with large, comfortable leather-clad heated seats and an attractive facia which is as clear as it is big. Much of the central console is taken up with touch controls on two substantial screens – one eight inch and one seven inch.

Both front seats have a good range of electronic adjustment for height, reach, angle and lumbar support and the steering wheel has reach and rake adjustment. It’s easy to find a comfortable driving position and it can be stored in the memory.

Generous rear seat space hasn’t meant a sacrifice in the load carrying capacity, with a boot which is more than ample in depth and width.

I test drove the Q50 powered by a willing 211 bhp litre four-cylinder petrol engine. Married to a pleasant, seven-speed automatic gearbox this engine has impressive power. Fuel consumption at 43.5 mpg in mixed driving is nothing to write hoe about, but this is a big car. Diesel variants are available for those who want better economy.

This comes at an on the road price of £34,125 which may sound a lot, but is less than some of its more established competitors. You pay for excellent build quality and high specification.

Infiniti is not alone in fitting “smart beam” systems to control full beam headlights. The technology is clearly not quite there yet and the sensors are too easily confused or slow to respond. The result is that you often can’t get full beam when you want it – usually because of light bouncing back from road signs – and you dazzle oncoming motorists because full-beam is often slow to switch off. More work needed on this particular technology.

That apart, the Infiniti Q50 is a serious contender in its sector.I think we’re going to be seeing a lot more of these impressive executive saloons on the road, and deservedly so.