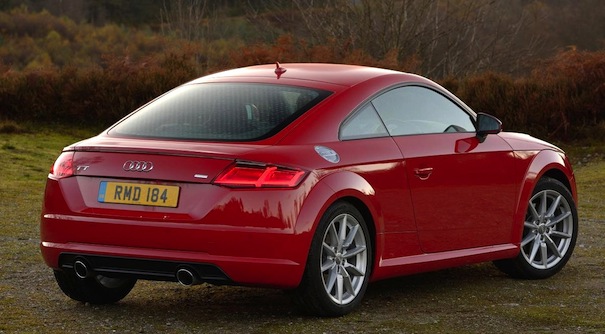 Audi has given its stylish TT Coupe a facelift. The third generation of this impressive car moves the design on yet further, writes Ian Strachan. But don’t worry – it’s still great to look at and fun to drive.

The TT Coupe has a sharp, sleek profile. And it’s wide, with twin exhaust tailpipes and an unmistakably Audi front grille. The body is made from lightweight aluminium and steel combined, rather than the all-steel body of its early predecessors. The result is better performance and better fuel economy.

The interior of the Audi has smart leather upholstery as standard, ultra-comfortable front seats a flat-bottomed sports steering wheel which looks strange but works remarkably well.

The TT Coupe which I tested came with the 2.0 TFSI petrol power unit. The engine pumps out 230 horse power, gets from 0-60mph in just over five and a half seconds, and the car sticks to the road like glue. It also sounds good with those twin booming exhausts. No point having the looks if you haven’t got the grunt to back it up.

To drive, the TT Coupe doesn’t feel as quick as it sounds or as the figures suggest. It is well behaved and composed and the engine is smooth and refined. It has a pleasantly gutsy sound to it but there’s nothing raucous about its performance, married to a slick-changing six speed manual gearbox. Despite its power it still returns a respectable 46.3 mpg in mixed driving.

The driving position is excellent and you are snugly held in very supportive leather seats. Controls and instruments are clear and well laid out with most of them centrally located, and there’s more than enough storage space, with a good glove compartment and central cupholders as well as a deep central storage box below the dash.

The Coupe is pretty well specified, with nicely crafted and distinctive 19 inch alloy wheels which come at £450 extra, climate control with the controls mounted neatly in the middle of the air vents, all round airbags, alloy pedals, and a nice Bang & Olufsen audio system (£1,590 extra).

Boot space is surprisingly generous, thanks to good depth. Rear seat room is inevitably cramped, as you’d expect in a car of this breed, and the steeply sloping rear window restricts rear seat headroom. The rear seat is not really for adults unless they are vertically challenged.

Ride and handling are superb, with crisp, sure-footed cornering and suspension which is hard without being uncomfortable.

The TT Coupe S Line 2.0 TFSI comes in at £31, 635 on the road. As well as the big alloys and the up-rated sound system my test car was loaded with a few more expensive extras which brought the on the road price to £39,045. These included striking red metallic paint (£550), technology pack with satellite navigation,(£1,795), heated front seats (£325) automatic matrix LED headlamps (£945), and auto-dimming electric, heated door mirrors (£280)

This car has good looks, is fun to drive but has a level of practicality which is rare among sports coupes. For my money it’s definitely worth a look.