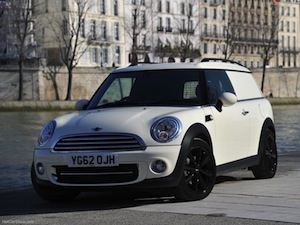 When our sister company Penham Excel was looking to replace its current fleet of vehicles for their field agents, we tested a number of small models on their behalf, including the Ford Fiesta, Vauxhall Corsa and the BMW Mini Clubvan.

The Mini Clubvan came out on tops in a number of areas including its residual value, fuel consumption, the unlimited mileage warranty and 3 years Free servicing offers,” said Adrian Hammonds, Managing Director of Birway Garage.

“The Clubvan comes with much higher specification than any comparable van in the segment with items such as DAB radio, air-conditioning, electric windows, anti-theft alarm and side and head airbags included as standard. It is the first commercial vehicle to be offered since the Mini brand was relaunched under BMW’s ownership in 2001.

The Mini Clubvan heritage can be traced back to 1960, when the original Mini – launched a year earlier – was joined in showrooms by the Morris Mini Van. With an extra 10cm in the wheelbase, closed-off load compartment and split rear door, it offered exactly the sort of workhorse capability that urban commercial users of the time required.

“With agents spread throughout the whole of the UK clocking up hundreds of miles per week, Penham Excel was looking for a reliable and smart vehicle which was economical to run and environmentally friendly. Following extensive tests the Mini ticked all of the boxes and we have now placed the first order of 10 vehicles which will arrive by the end of April”, added Adrian.